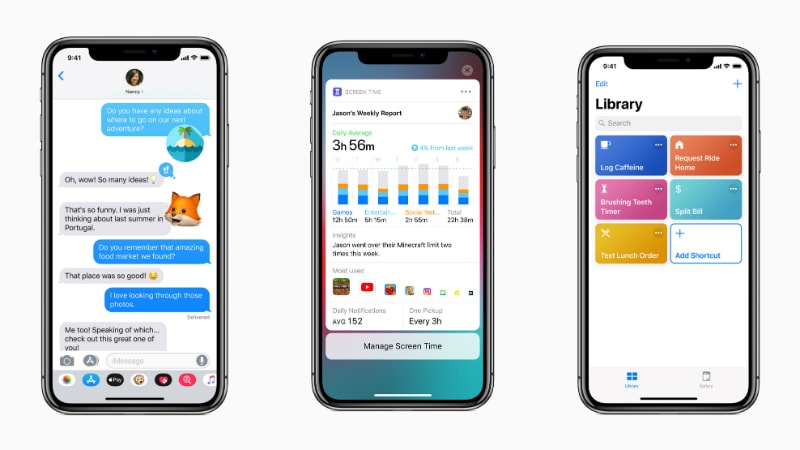 iOS 12 is the biggest update for the platform that’s been released this year. To recall, it was officially unveiled back at WWDC 2018. It majorly aims to improve performance on older devices. Apple claims that iOS 12 enables the devices to launch apps up to twice as fast as on the last iOS update. Also, the camera launches up to 70 percent faster, whereas the keyboard appears up to 50 percent faster, and typing is also more responsive than last iOS version. Apple also notes in the official changelog that all supported iOS 12 devices see the improved performance – starting from iPhone 5s and iPad Air.

In addition to the boost in performance, iOS 12 brings the all-new Photos app that includes a new For You tab that includes all the personalised memories and highlighted photos that are from the same day in the past year(s), combining Memories and iCloud Shared Albums. The Photos app also has Sharing Suggestions to recommend sharing photos taken at events with the people who are featured in them. Further, there is an improved search within the new Photos app that lets you find your memories based on any particular place, business name, or event. The import functionality of the camera has also been improved with a large preview mode as well as an overall faster import experience than the previous Photos version. Apple has additionally provided the ability to edit images in RAW format.

Apart from the new features on the Photos app, iOS 12 brings a fresh camera experience that has an improved Portrait mode and the support to scan QR codes. Apple has also updated messaging on iOS 12 with Memoji that allows you to bring you as an Animoji with customisable features. Animoji on the latest iOS version has also been expanded with T-Rex, ghost, koala, and tiger characters. Apple has also added the ability to make Memoji and Animoji with wink and stick out their tongue. You can now also capture Animoji recordings for up to 30 seconds. This is higher than the original 10-second limit. Further, there are new camera effects including filters, text effects, and iMessage sticker packs and shapes to enhance your messaging experience.

Apple gained huge audience attraction at the time of announcing iOS 12 at its WWDC 2018 back in June for the Screen Time feature. This helps you see detailed information about how much time you spent with apps and websites on your iOS device. There are also built-in tools to offer you the right balance of time spent. You can see the time spent on apps, usage across categories of apps, and how many notifications are received and how often the device is picked up. Likewise, you can set app limits as per your convenience to set the amount of time you or any of your family member spend in apps and on websites. The latest iOS version also has an improved Do Not Disturb feature that you can turn off after a certain time, location, or calendar event. There is also a Do Not Disturb During Bedtime that hides all notifications from your Lock screen while you sleep.

Siri has also been uplifted in iOS 12 with Siri Shortcuts and “Add to Siri” buttons for third-party apps. Siri can also suggest shortcuts on the Lock screen and in Search to ease your experience. You can also translate phrases in more languages, with support for over 40 language pairs. Further, you can ask Siri to check facts about celebrities, such as when they were born, and ask questions about food, including calories and nutrient content, and even turn the torch on or off. The experience is also more natural than before and expressive voice has been provided in Irish English, South African English, Danish, Norwegian, Cantonese and Mandarin (Taiwan).

Apple has brought improvements to the notifications avenue as well. With iOS 12, you’ll find grouped notifications on your device. You can also use the Instant Tuning to control over your notification settings directly from the Lock screen. Similarly, there is a new Deliver Quietly option that silently sends notifications directly to the Notification Centre without interrupting you.

To uplift the privacy and security on iOS 12, Apple has provided an Enhanced Intelligent Tracking Prevention feature in Safari that prevents embedded content and social media buttons from tracking cross-site browsing. The updated Safari browser also suppresses ad retargeting by limiting the ability of advertisers to identify different iOS devices. You’ll also be suggested with new passwords when you create an account or change a password in most apps and in Safari. Also, you can share passwords with contacts using AirDrop and view all the reused passwords by going to the Passwords and Accounts settings. Furthermore, security code sent over SMS messages are available as suggestions in the QuickType bar…..Read More>>>